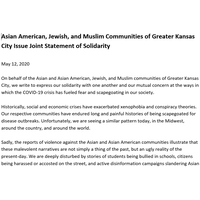 On behalf of the Asian and Asian American, Jewish, and Muslim communities of Greater Kansas City, we write to express our solidarity with one another and our mutual concern at the ways in which the COVID-19 crisis has fueled fear and scapegoating in our society.

Historically, social and economic crises have exacerbated xenophobia and conspiracy theories. Our respective communities have endured long and painful histories of being scapegoated for disease outbreaks. Unfortunately, we are seeing a similar pattern today, in the Midwest, around the country, and around the world.

Sadly, the reports of violence against the Asian and Asian American communities illustrate that these malevolent narratives are not simply a thing of the past, but an ugly reality of the present-day. We are deeply disturbed by stories of students being bullied in schools, citizens being harassed or accosted on the street, and active disinformation campaigns slandering Asian and Asian American businesses. Together we condemn these acts of discrimination and violence as well as the calls to boycott Asian cultural events and community centers across the country.

We have also seen a troubling pattern of antisemitic and Islamophobic conspiracy theories related to COVID-19, including from a man with ties to extremist and neo-Nazi organizations who was prevented from implementing an attack on a local area hospital.

Together, our communities assert that diversity is our country’s greatest strength, and we reject attempts to blame immigrants, Asians and Asian Americans, Jews, Muslims, or any other community for this pandemic. We call on all people of goodwill to remain vigilant about the ways that fear and anxiety can manifest, even subconsciously, to cause such scapegoating. Instead, we hope that as a Kansas City community, we can use this moment to educate ourselves, practice greater kindness and compassion, and support one another through this challenging time.

Together, we offer the following ways that our allies can further foster an inclusive and diverse Kansas City:

1. We encourage the media to avoid the casual use of photographs depicting people of Asian descent (including people of Asian descent wearing facemasks) in its coverage of the virus. These photos frequently feature people who are not known to have the virus, and locations entirely separate from the focus of the story. These practices reinforce the racist association between the disease and Asian communities, and have the potential to both directly and indirectly incite hostility and violence toward our communities. (Source: National Association of Asian American Professionals)

2. We request our local and national leaders to consistently refer to this disease only by its clinical name, COVID-19, and to avoid problematic descriptions for it, such as “the Chinese virus.” Use of these terms could lead some people to blame particular groups for a deadly disease that infects equally, without regard for race, ethnicity, or national origin. (Source: A statement of solidarity signed by over 180 Jewish organizations)

3. Please consider supporting Asian, Asian American, and immigrant-owned businesses at this time as you seek to support the local economy. These businesses are being hit particularly hard, due to the combination of discrimination and COVID-19 related closures. Visit the Asian Chamber of Commerce KC for a listing of relief resources.